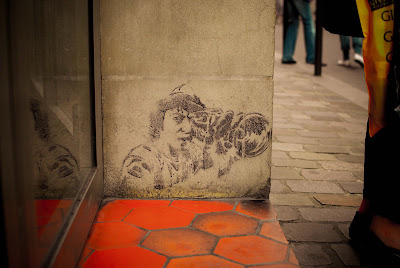 After waiting for months I was finally able to go see Exit Through the Gift Shop, last night. It was not until the middle of the film that I realized that I had taken a shot of some MBW graffiti while in Paris this past spring. After a long day of walking and ending up in the latin quarter I sat down on a stoop for a few moments, I looked over and noticed this image and thought it would make a cool photo. At the time I was aware of Banksy, but not Mister Brain Wash.
As for my thoughts on the film, I thought it was fantastic and hilarious at moments. I also think that it was exactly what it was "supposed" to be. There is a lot of speculation surrounding this film and the making of this film.
It felt to me like a totally fabricated documentary made of real events. From the very beginning I felt like I was watching a mockumentary on SCTV. My husband and I have debated sections of the movie, I have read other reviews on the internet and I am sticking by thoughts I had as the movie ended; this movie did exactly what it was intended to do, get people talking.

If you get a chance to see it, do it!

Well put! Yeah, the fact that I'm still not sure where it turns into a fake story, there's obviously real events involved AND it's just such a hilarious take on the whole art world THING. I loved it. Loved it loved it loved it.

That's so funny that you had a MBW and didn't even realize it. I'd never heard of him until the film either. Now here's the question.....was MBW really trying to be a grafitti artist, or was ALL his graffiti made with an eye toward this film?

I don't think MBW was ever supposed to be a graffiti artist, but I don't think these are intended just for the film either...could it have been Banksy who actually made these? Just a thought.
The point where it seemed to turn for me was after the "remote control life" and Banksy told Thierry to go back and make art???
I think they were all involved with each other some how.

Never heard of it, but it looks like something I'd enjoy. Guess I can netflix it eventually.

I saw it last night and I felt by the end of the story MB was a fake story that took on a life of it's own and pretty clever commentary of the state of the art world and collectors.

Until this movie I had never really heard of mister brainwash or seen his work on any of the graffiti websites. The mb stencil looks like a banksy to me, and this is all a clever ruse.

Even if I am not right, banksy has managed to pull off a fast one and get us all wondering/questioning :)

I think I tend to agree about the whole MB thing.