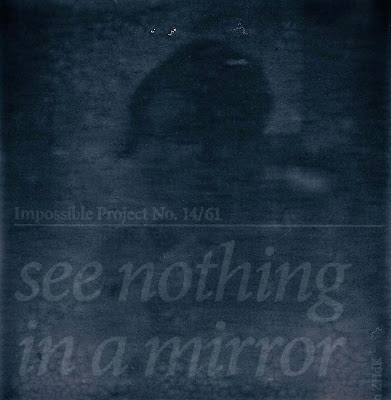 I received my PX70 color shade from the impossible project last week. My SX-70 is currently out of commission, so I popped a cartridge into my Sun600. The black slide that came out said "see nothing in the mirror" I decided this was a sign to do a mirror self-portrait, though I should have taken note of the "see nothing". It was a fairly early on a warm day, not the scorchers that we have been having, but still warm. The light was not overly bright, but bright enough I thought. I immediately covered the print and let it sit for quite a long while. The image I got was very very vague, even after a few days. 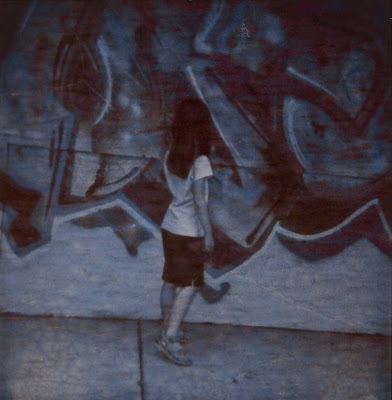 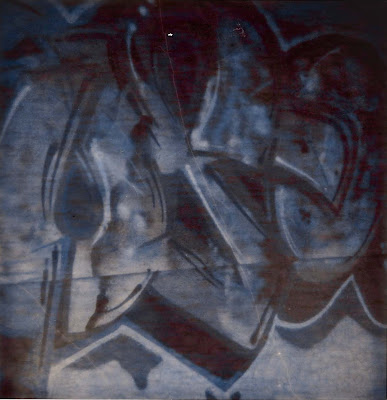 The two shots above are my third and fourth shots. These were taken at the graffiti hotel we visited last weekend, mentioned in a previous post. It was a fairly bright day and on the warm side. I put the photos in my pocket as soon as they came out and left them there until we were ready to go, then I transferred them into a magazine. They were in a warm car most of the afternoon. These are scans of the shots a few days later. I have an image this time, but think I will try keeping the print cooler next time. I plan to research others methods for success and then play around some more!
Posted by C. Knack at 7:06 AM

I'm glad you have the low down on these Impossible films, because I've only tried 2 with mixed results. Maybe I'll do better next time if I use some of these tricks.

the best luck I had with the silver shade was when I stuck it in the refrigerator - not always a possibility, but somewhere cool, I guess.
I haven't had much luck with the film, but testing it out is kind of fun, although expensive!

I like these images a lot!
One of the things with the PX70 and a 600 camera, is that it will slightly underexpose. I usually turn up the light/dark dial a bit with my 600.

thank you, lisa! I haven't tried that yet. I will do that :)